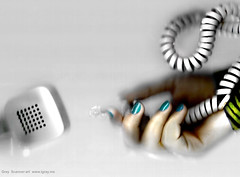 Not understanding can be  a good reason to disconnect, both in daily communication and in life.

The clues in the gap- fill exercise for this song, Communication by the Cardigans, can help you  recognise linking features of connecting consonants to vowels and identify flap or tap t, /ɾ/, in order to understand  speech better, so that you don't have to disconnect!

In connected speech, across words, this stress-sensitivity ceases to exist, and  /t/ followed by any vowel undergoes this t- to- r process; not only do we find tapping in get alóng  /ˈɡeɾəˈlɒŋ/ , where the next vowel is unstressed, but in get úp /ˈgeɾʌp/ too.

I have often wondered how much of what we say in class gets through to our students...Looking at the enormous amount of good work you've been doing, I say to myself: when will they ever learn?

Or is it that following suit only means trying to imitate the one closer to you? I wish all my students got caught in this passionate game, hunting for clues, becoming aware, little by little, of the beauty and the complexity of it all.