THE LOGICAL SONG FOR SYLLABIC CONSONANTS 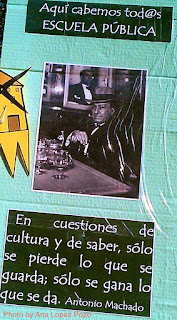 This post is dedicated to all those Spanish State Teachers, colleagues of mine, who  are suffering the consequences of the regional governments  education cutbacks  in various Spanish Communities and to all those thousands of now unemployed teachers who have not been contracted by these regional governments in order to transfer the public money, thus saved,  to Private Education.  A tough situation for the teaching community  only sustainable thanks to the teachers' professionality and generosity. My  support  for their patience and excellence of their work in such difficult times.

"Regarding culture and knowledge, you only lose what you save; you only gain what you give" Antonio Machado. 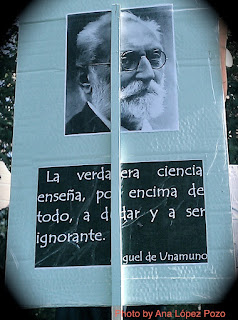 "True science teaches, above all, to doubt and to be ignorant". Miguel de Unamuno.

This is also a perfect song to practise Syllabic Consonants,  a phonetic element that normally patterns as a consonant, but may fill a vowel slot in a syllable. A weak, unstressed syllable often has a schwa /ə / in it. But if the schwa is omitted, we are left with a syllabic consonant,  a syllable where the vowel and the consonant have merged into one.
The syllabic consonants  n, l,  r, m  are phonetically represented  as  / n̩ /   / l̩/  /m̩/   /r̩ /

THANKS A LOT FOR SHARING THIS USEFUL AND WONDERFUL BLOG WITH US. I MISSED YOUR POSTS LAST COURSE.
I LOVE THIS SONG AND IT'S A GOOD IDEA TO PRACTISE WITH IT NOW.
I'M EX-STUDENT OF EMBAJADORES EOI. ALL MY SUPPORT AND SOLITARITY WITH THE SPANISH STATE TEACHERS.
Carmen Martín

Don't you think that /hæpm̩/ (happen) contains a syllabic /m/?

Thanks for your comment Kraut and yes, I do think that (happen) undergoes assimilation of n into m, as it's preceded by a plosive and so there is syllabic consonant formation, a precondition sine qua non. I wanted to deal with that feature, progressive assimilation, at a later stage. My decision probably responds to a mentally stored form, but still, your comment encouraged me to add an example of syllabic consonant m̩ in this post, which, for my purpose, I chose (blossom).

Hello! I've been reading your site for a long time now and finally got the courage to go ahead and give you a shout out from Kingwood Tx! Just wanted to mention keep up the excellent job!

Pretty nice post. I just stumbled upon your weblog and wanted to say that
I've truly enjoyed surfing around your blog posts. In any case I'll be subscribing to your rss feed and
I hope you write again soon!

Many thanks for your support from one of the many "temp teachers"!
Very good song and excellent exploitation

Supertramp is one of my favorite bands, Thanks for helping me understand the lyrics of this song that I have heard so much without understanding the lyrics. Congratulations on your commitment to the Public school and for such well-chosen quotations.